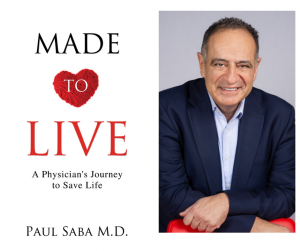 Dr Paul Saba MD author of Made to Live

equity. Women who wish to give birth and care for their babies and children would benefit from medical, psychological, financial (including career opportunities), educational and social support.

MONTREAL, QUEBEC, CANADA, Nov. 27, 2022 /EINPresswire.com/ — “This Thanksgiving weekend is a good time to reflect on our gratitude for our lives and those of our friends, family and our neighbours, and that includes mothers who have faced different pregnancy challenges.”

A 2005 study published by the Guttmacher Institute, asked American women to list the different reasons why they decided to abort their unborn baby. Most provided more than one response. 73% mentioned financial concerns, whether married or single. 74% we fear that having a baby will change their lives significantly, including the loss of education and career opportunities. Almost half had relationship problems. 14% of their partners wanted an abortion. 13% in the survey expressed concerns about the possible health of the future baby. 1% were concerned about their own health. https://www.guttmacher.org/sites/default/files/pdfs/pubs/psrh/full/3711005.pdf

Dr. Saba states the following: “A patient of mine, a single woman in her thirties with a low paying job, found out that she was pregnant. Some of her friends encouraged her to have an abortion due to her financial resources. and another young child she was already her boyfriend threatened to leave the relationship if she did not have the abortion.Despite financial pressures, the father’s refusal to help her and the risk of losing the relationship, she decided to continue with her pregnancy and recently gave birth to a beautiful daughter who is her joy.”

In the book “Made to Live” madetolive.com, the story of Jessica, Dr. Saba’s daughter, sheds light on the challenges parents face in bringing children with possible health conditions into the world. Before she was born at 20 and 24 weeks, ultrasounds showed that Jessica had a serious heart defect. Dr. Saba and his wife Marisa were also told that Jessica was likely a Down baby. They were encouraged to consider abortion, which they refused. Marisa said if God would allow them to have a disabled child, He would also equip them to take care of our child. He was even asked how aggressively the medical team should intervene after Jessica’s birth if there were any issues regarding her survival. His wife bravely replied “I did everything to bring the baby to this point, I expect you to do everything to save my baby.” madetolive.com

Thanks to incredible medical care and support from the Montreal Children’s Hospital, Jessica is now a beautiful, bright and eloquent 13-year-old, according to Dr. Saba.

Abortion goes against the Judeo-Christian ethics of medicine based on the Good Samaritan model. This has been the foundation of modern medicine for centuries. The Good Samaritan model guarantees medical care and support for life, regardless of cost. This was enshrined in the teachings of Sir William Osler, considered the father of modern medicine and medical ethics. He was a graduate and professor of medicine at McGill University and the Montreal General Hospital. He also helped found Johns Hopkins Medical School. Dr. Osler’s history and medical philosophy are further described in Dr. Saba’s book “Made to Live”.

One of the arguments used by abortion advocates are the financial costs poorer women cannot afford during or after the delivery of their babies and the additional economic costs to governments.

According to a 2015 U.S. Congressional policy report, The Effect of Abortion on the Black Community, more than 19 million black babies have been aborted since Roe v. Wade in 1973, the majority of abortion centers within minority communities contributing to the high rate that black women obtain abortions. https://www.congress.gov/115/meeting/house/106562/witnesses/HHRG-115-JU10-Wstate-ParkerS-20171101-SD001.pdf

In a 1996 study, it was estimated that for poor women in the United States who are often covered by Medicaid programs, there would be an additional savings of $1.2 billion per year to the government if these women did not did not deliver babies from their unplanned births. https://www.ncbi.nlm.nih.gov/pmc/articles/PMC8101771/#pone.0250692.ref044

Another study published in 2003 estimated that abortions in the United States would save $4 for every dollar spent on prenatal care, childbirth services, and medical assistance for low-income women over a period of time. two years. https://pubmed.ncbi.nlm.nih.gov/12667113/.

Dr Saba says: “Economic savings should not be used as an argument to prevent pregnant mothers who want their children to give birth. Moreover, mothers in financial difficulty should not feel pressured to abort their offspring. services, including transportation costs, should also consider paying childbirth, parental leave and childcare costs for mothers who wish to babysit. These same companies should also provide fair and reasonable wages so that mothers can provide for their families. Governments must also intervene Women who wish to give birth and care for their babies and children would benefit from medical, psychological, financial (including career opportunities), educational and more important social. They should and must be treated fairly and equitably.

“Corporations and governments should invest in life rather than just promoting abortions.” It is estimated that to date, more than 63 million infant lives have been lost in the United States in the 50 years since the Roe v Wade decision. https://nrlchapters.org/saus2022report/ If the same percentage of babies is calculated using the US experience, approximately 1.5 billion child lives were lost worldwide.

The long-term economic, social and health costs of lost lives include a depleted workforce of nurses, teachers and other essential workers who could have contributed to a more robust and sustainable society.

According to Dr Saba, “We need to value babies, children and future adults because, as my daughter Jessica inscribed above the family portrait she painted when she was seven years old, we are “Made to live”.

Dr. Paul Saba is a graduate of McGill University School of Medicine and is currently a family physician in Montreal. He has trained and worked in Canada, the United States and overseas in underdeveloped countries. He has dual American and Canadian citizenship. He is co-founder of the Coalition of Physicians for Social Justice and author of “Made to Live” madetolive.com
Email: paulsaba@madetolive.com
Phone: 514-886-3447

Every human life has value – never give up, always have hope. You are precious because you are made to live.


EIN Presswire’s priority is source transparency. We don’t allow opaque clients and our editors try to be careful not to weed out false and misleading content. As a user, if you see something we missed, please bring it to our attention. Your help is welcome. EIN Presswire, Everyone’s Internet News Presswire™, attempts to define some of the boundaries that are reasonable in today’s world. Please see our editorial guidelines for more information.