Man Up or Open Up? was commissioned by the Open University Broadcast & Partnerships team to create a learning journey from the OU and BBC co-production ‘James Arthur: Out of Our Minds’ for BBC Three. The program is a deeply personal film starring singer-songwriter James Arthur, focusing on men’s mental health. The Outreach and Partnerships team, inspired by James Arthur’s candid reflections on his own experiences of poor mental health, wanted to explore why men struggle to seek help in a crisis.

Academic contributor Dr. Martin Robb, the Open University scholar who consulted on animation, says: “Stereotypes about masculinity often prevent men and boys from asking for help. Despite recent shifts in ideas about gender roles and relationships, many young men still feel pressure to take strong action, choosing to push things back rather than seek support.”

Produced by Kong Studio and designed and directed by Hannah O’Brien, the animated short shines a light on the shocking statistics behind the issue in a tactile and informative way. It also showcases the fantastic work being done by organizations such as “Alright Mate?” and brings to life Dr. Martin Robb’s OR research in this area.

Chris Belson, Head of Broadcast Platforms and Public Engagement at The Open University, said: “I and Dr Martin Robb, the academic consultant on the James Arthur documentary, were passionate about creating content in additional line that explored this larger question – why many men find it difficult to talk about their mental health. It was also a great opportunity to learn from and advocate for some of the people and organizations who are on a mission to change this. This will always be a very sensitive, and often complicated, subject to broach – so we thought animation would be a perfect way to explore it with empathy and accessibility.”

Kong had previously developed an exciting working relationship with the Open University Broadcast and Partnership team for the BBC co-productions ‘Secrets of the Museum’ and ‘Aids: The Unheard Tapes’. Kong Studio is committed to creating entertaining content with a strong ethical and social purpose – and UO’s projects align perfectly with this mission.

Kong co-founder Bill Elliott on their working relationship with the OU, “We love producing films for the Open University. The subject matter is always interesting and thoroughly researched and it allows us tremendous freedom to creation. It allows us to experiment with different visual styles and connect with exciting new talent. It’s the perfect win-win for us.

Chris Belson adds, “Our experience with Kong has shown us how beautifully they use visual storytelling to bring topics like this to life. From the moment we first broached the concept with them, it was clear that they connected with what we were trying to do. Host Hannah O’Brien immediately understood how to creatively and conscientiously bring our words and research to life in a compelling and visual way. Similarly, the Kong Studio team has always been flexible and accepted all feedback from our experts – appreciating the care needed when trying to visualize particularly nuanced and delicate concepts.

Man Up or Open Up? was directed by Hannah O’Brien. Emma Burch, Executive Producer at Kong Studio, said, “We are always on the lookout for new animators as we aim to support young talent in the industry. Bill came across Hannah’s Instagram recently, so she was already on our radar. When we considered animators for this project, we knew its hand-drawn and hand-painted visual style would bring a human tone to a difficult subject matter. The animation production schedule was relatively tight at five weeks. Nevertheless, Hannah was able to draw on her experience from previous projects, which dealt with similar sensitive topics, to streamline her processes. Hannah has created a beautiful film in a compressed schedule.” 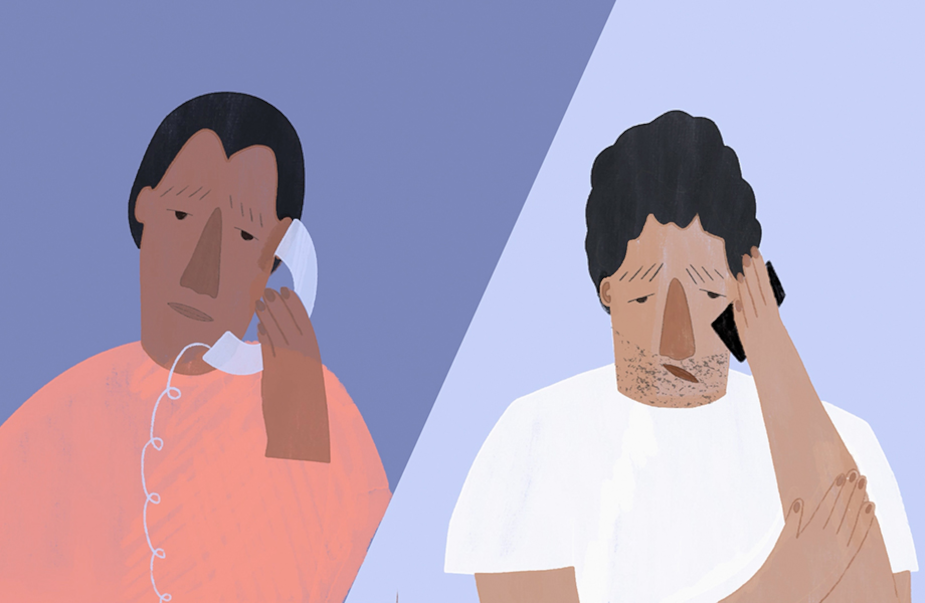 Chris Belson and Dr. Martin Robb handed Kong’s team a brief and a script for Hannah to bring to life. Regarding the production process, Hannah said, “The OU team was great to work with. They provided feedback throughout the storyboard and animatic stage, offering suggestions for how someone struggling with their mental health was portrayed. I visualized a feeling of unease beginning in your mind, then gradually taking over your whole body. This is where the swirling lines inside his head developed, illustrating the physical feelings that mental health issues can cause. The use of color was also important to me. The animation starts off very blue and gray and gradually becomes more colorful, depicting the man feeling more himself as he recovers.”

Of the final film, Dr Martin Robb said: “It can be very difficult to convey complex and sensitive ideas about men, masculinity and mental health in an engaging and accessible way, but this animation does it beautifully. TO DO.”

Chris Belson, Head of Broadcast Platforms and Public Engagement at The Open University, adds: “The result is an engaging and insightful animation that we believe will be a powerful journey from the story of James Arthur and will brilliantly support the teaching and curriculum of our faculty. Not to mention something that will hopefully inspire even more men, to open up rather than become men. “

‘Man Up or Open Up?’ is available to watch now on the Open University’s broadcast and partnership page.